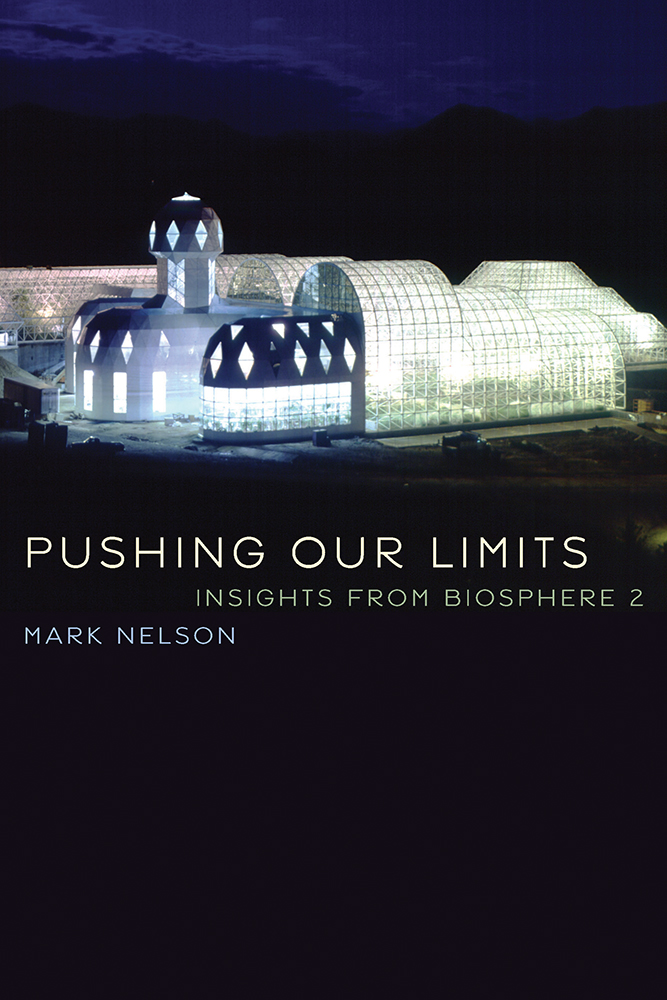 Pushing Our Limits – Cover
By Mark Nelson
Pushing Our Limits is a fresh examination of Biosphere 2, the world’s first man-made mini-world, twenty-five years after its first closure experiment. Author Mark Nelson, one of the eight crew members locked in the enclosure during the 1991–1993 experiment, offers a compelling insider’s view of the dramatic story behind Biosphere 2. Biosphere 2 helped change public understanding of what our global biosphere is and how it provides for our health and well-being. However, the experiment is often dismissed as a failure, and news outlets at the time focused on interpersonal conflicts and unexpected problems that arose. Delving past the sensationalism, Nelson presents the goals and results of the experiment, addresses the implications of the project for our global situation, and discusses how the project’s challenges and successes can change our thinking about Biosphere 1: the Earth…
Show more

“Recently, I toured Biosphere 2 in Oracle Arizona and followed up by completing a University or Arizona online course entitled Biosphere 2. The tour was informative and entertaining and the course was informative. However, this book has content that is not presented in either the tour or online course. I wanted to understand the history of Biosphere 2, specifically, the history of the enclosure experiments. The book is well written and answers many of the questions I had regarding the original experiments. This book makes clear the tremendous amount of science, engineering and effort that went into building Biosphere 2 and preparing for the enclosure. Experts and scientists from all over the globe were involved in designing the biomes and structures. Basically, it makes the bad press and criticism that Biosphere 2 received during the enclosure experiments seem petty and shallow. Anyone that says science wasn’t being done, didn’t do their homework. The one area not covered in depth is the positions of the two factions that developed both inside and outside of Biosphere 2 during the two year enclosure experiment. The book give you a glimpse of the conflict but doesn’t go into detail. This does not seem to be an oversight. It seems to be more intentional downplaying of a dispute that was resolved decades ago. It would seem that one faction wanted to adhere to the original intent of Biosphere 2 and continue with extended human enclosure experiments, while the other side wanted to repurpose Biosphere 2, downplaying the sealed environment aspect to accommodate other experiments. The book gives you the history of the original Biospherians, prior to the enclosure experiment. It outlines their years of training in the field, the amount of effort they put into helping bring Biosphere 2 to reality, as well as their commitment to the project. The argument that no science was being done because none of the Biospherians had science PHDs, is lame to say the least. I find myself wondering if “scientists” would have continued the experiment for two years and endured the hardships that the Biospherians faced. Obviously, Biosphere 2 was repurposed. Not that it matters, but I would have loved to see the sealed enclosure experiments continue. The conclusions section was, to my mind, quite optimistic, but Dr. Nelson gave adequate reason for his perspective. However, I am forced to take exception to the statement that the population growth rate needs to be reduced. First, perpetual population growth, at any level is unsustainable. Second, there is overwhelming evidence that the Earth is already seriously overpopulated. If we are going to live sustainably, controlling our population has to go hand in hand with controlling our consumption. Addressing consumption alone will not suffice. If you are interested in Biosphere 2, this book is well worth reading.” – Victor L. Phelps
Show more
Show less

Letters to Bioscience by M. Nelson and W.F. Dempster

We encourage you to purchase your copy of this book at your local bookstore!